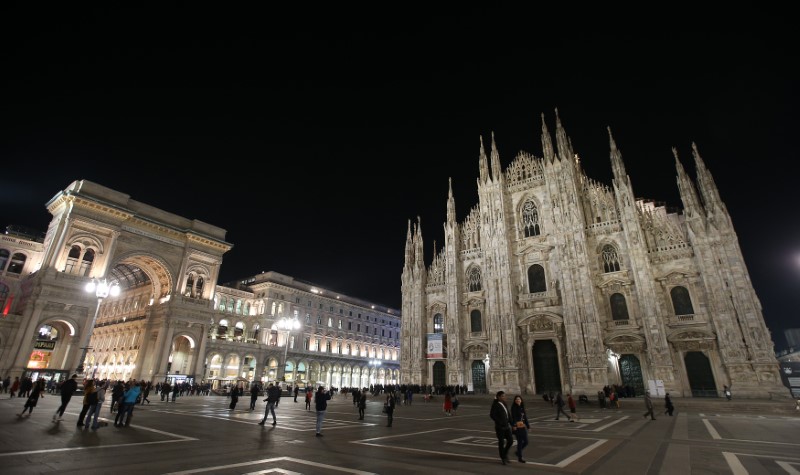 At their office in a rundown Rome neighbourhood, volunteers from a neo-fascist group line up bags full of groceries to donate to poor Italian families, keen to show local residents they are ready to help.

Such initiatives helped CasaPound win 9 percent of the vote in a municipal election this month, securing its first ever seat on Ostia’s council.

Buoyed by a rising tide of anti-immigrant sentiment and years of economic strain, the group hopes for a similar breakthrough in national elections due next year.

Europe is proving fertile terrain for the far right, with the Alternative for Germany party winning seats in the Bundestag in September for the first time and Austria’s Freedom Party, which was founded by Nazis, in talks to enter government.

Although polls say CasaPound will struggle to make an impact nationally, the group is ploughing a furrow in forlorn areas like Ostia, where the beach fills with day-trippers in summer but the backstreets are dogged by organised crime and poverty.

“They help lots of families who are in trouble, although you can’t deny they can be violent,” said 33-year-old Daniele Fascetti, an unemployed Ostia resident, recalling how CasaPound delivered water to homes when the supply was cut off last year.

“It works like this: ‘I don’t have water, you bring it to me. No one else helps, other political parties never come here. I vote for you.'”

A microcosm of some of Italy’s thorniest social issues, Ostia’s problems were laid bare in the local council election campaign, the first since the previous mafia-infiltrated council was shut down two years ago.

An assault on a journalist by a man linked to the mafia, who had praised CasaPound on Facebook, prompted the government to deploy the army for the run-off. CasaPound condemned the attack and distanced itself from the coastal mafia clans.

Shrugging off any damage to its image from the incident, the group’s prime ministerial candidate, Simone Di Stefano, said he saw the Ostia result as another step forward after it took 8 percent in mayoral elections in Lucca, Tuscany, in June and gained seats on councils in nearby Todi and the Alpine town of Bolzano.

“Things have certainly sped up a lot,” Di Stefano told Reuters in the six-floor building in Rome which CasaPound occupies and has emblazoned its name on. “We are across the whole boot,” he added, referring to the shape of Italy.

Eighteen families live in the block, whose inside walls are hung with anti-capitalist posters and the flag of the National Fascist party under wartime dictator Benito Mussolini.

The centre-left government is trying to pass a law that would clamp down on such Fascist imagery, concerned about a return to extreme right-wing ideology.

Di Stefano is indifferent to that prospect, pointing instead to the black and white tortoise logo that represents CasaPound’s core belief that all Italians have a right to housing.

“We are trying to take all the anger there is among Italians in the right direction, which is criticism of globalisation and the European Union,” Di Stefano said.

CasaPound is clamouring for migrants to be removed from a squalid camp in Ostia, and, in July, volunteers in bright-red tabards chased away roving street hawkers, mostly Africans, who peddle drinks, clothes and jewellery on the beachfront.

Rome’s mayor Virginia Raggi, of the anti-system 5-Star Movement, denounced the group for “violence and intimidation”, saying “no one should take the place of the institutions”.

But many of Ostia’s 230,000 residents feel abandoned by the state, and although the 5-Star won Sunday’s run-off vote on Sunday, turnout was a threadbare 34 percent.

“Politicians have totally disappeared here, and CasaPound has taken advantage of that vacuum, stoking controversy about migrants,” said Daniele Piccinin, 41, a freelance journalist who cast a blank vote.

Railing against immigration is not reserved for the political fringes in Italy, where more than 600,000 migrants have arrived by boat in the past four years.

A poll by SWG this month showed 65 percent of respondents said they were not open to immigrants, while 55 percent said racism was acceptable in some circumstances.

Mainstream parties like the Northern League, part of former prime minister Silvio Berlusconi’s centre-right bloc, have tapped adroitly into such sentiment, helping to limit CasaPound’s expansion at the national level.

But the party, which was founded in 2008, had room to grow, said Marco Valbruzzi of the Cattaneo Institute research firm.

“Continuing to cultivate the peripheral areas can probably bear fruit in future elections – although not in 2018 – if the traditional parties do not realise they need to go back to having a presence on the ground,” Valbruzzi said.

For some in Ostia, the creeping advance is worrying.

“I didn’t live through Fascism, but my mother told me stories,” said Raffaella Di Bona, 54, who works in tourism. “We need to remember that in the 1920s we were the migrants, otherwise history has taught us nothing.”